Hong Kong: The surprises behind one of the most remarkable champagne markets on earth

No other country drinks champagne like Hong Kong. This country has been bubbling along on an incredible champagne wave like no other. But all this is changing. In the weeks before the inaugural Taste Champagne Hong Kong, I take an intensive look at this unique market and discover more than one surprise.

Nowhere on earth drinks champagne like Hong Kong. This country brings in almost three times more vintage champagne than any other as a proportion of its champagne imports. Its average spend per bottle is the highest in the world after the USA and its love affair with prestige champagne is exceeded only by Germany and Japan. Hong Kong holds a privileged position as one of the most premium champagne markets on earth. It confidently upholds its position as the 15th largest market, up from just 23rd only a decade ago. Its small population ranks it seventh in the world for consumption per head of population, and the highest outside of Europe and Australia. Hong Kong’s champagne trends are certainly worth popping a cork to celebrate!

Champagne in Hong Kong has entered a new era.

Hong Kong has been bubbling along on an incredible champagne wave, more than trebling consumption in the decade from 2003 to 2013. But all this is changing.

Over the past four years, Hong Kong’s growth in champagne imports has softened to an average of just 1.7% per year. And a closer look at the champagnes Hong Kong is choosing reveals considerable potential for this market to mature.

These are perhaps some of the reasons why the champagne bureau has forecast a rise in Hong Kong’s growth in champagne imports in 2017, singling it out as ‘a market with great potential’ thanks both to its ‘role as “wine hub” of Southeast Asia’ and growing domestic consumption.

Hong Kong has now entered a phase of champagne market consolidation. Years of flamboyant growth are over and the time has come for Hong Kong’s champagne lovers to explore the wonderful diversity that champagne has to offer. 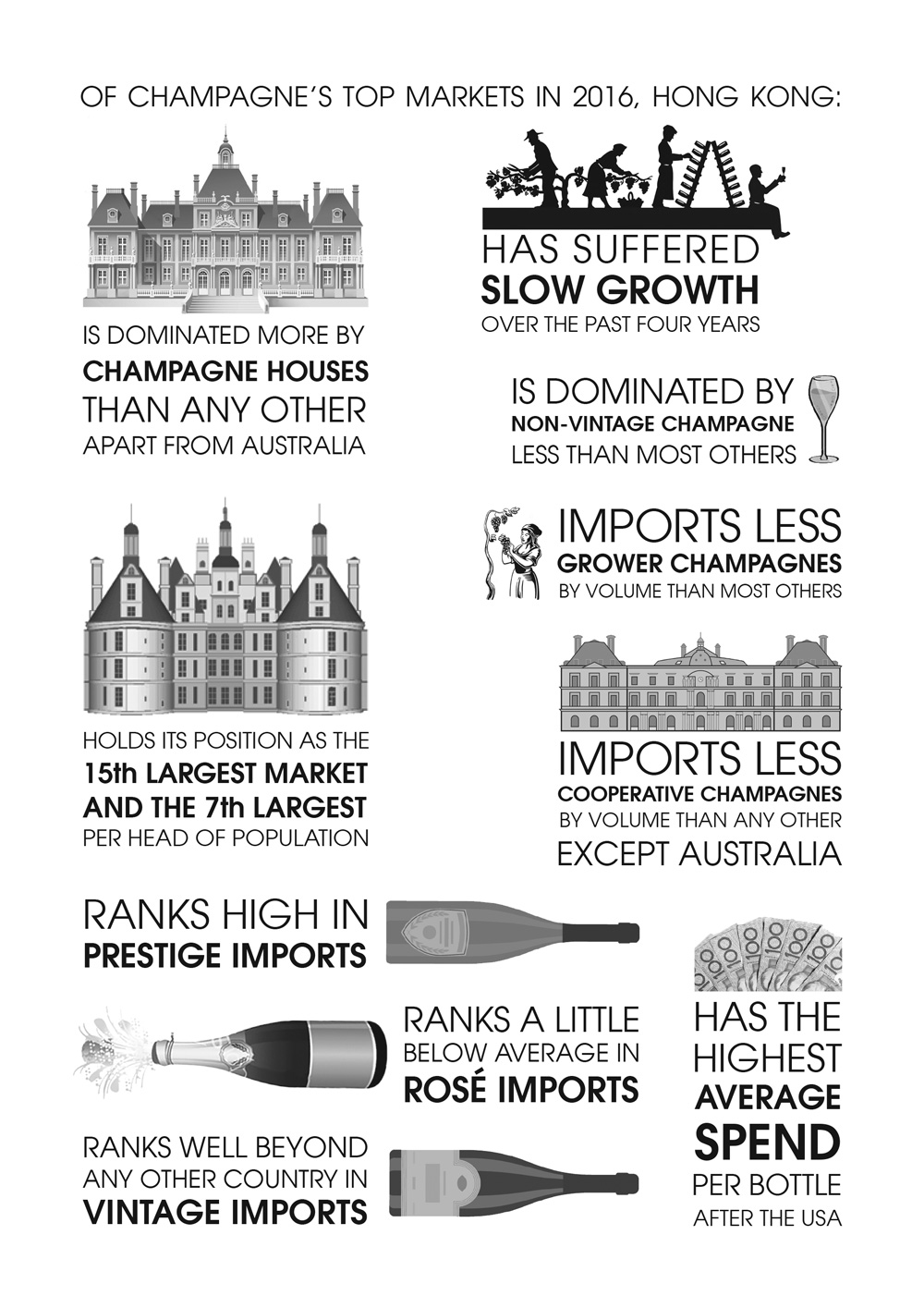 The volatile world of Champagne has been buffeted by fast-changing economic times. Global sales were conservative in 2016 as Brexit wounded sales to Champagne’s biggest export market. Meanwhile, domestic sales were depressed in the wake of terrorism attacks. Champagne’s recovery after its record sales of 2007 has been slow, hampered by global and European crises, though value has grown slowly, achieving a new record of €4.7 billion in 2015 and again in 2016. Champagne is poised for growth, and its two biggest players and most ambitious exporters, Moët et Chandon and Veuve Clicquot, are currently scurrying to construct vast new facilities to substantially increase production.

Despite this small decline in volume of sales, the average value per bottle of champagne sold globally in 2016 increased by 1.5%. Champagne rosé exports rose by 8.6% by volume in 2016, to achieve a new record, exceeding 10% of champagne exports. Prestige cuvée exports rose by 4.6%.

Over the past decade, sales by volume by champagne houses have dropped 4.5%, growers by 23.1% and cooperatives by 14.5% as Champagne moves toward a steadily increasing dominance by its houses. 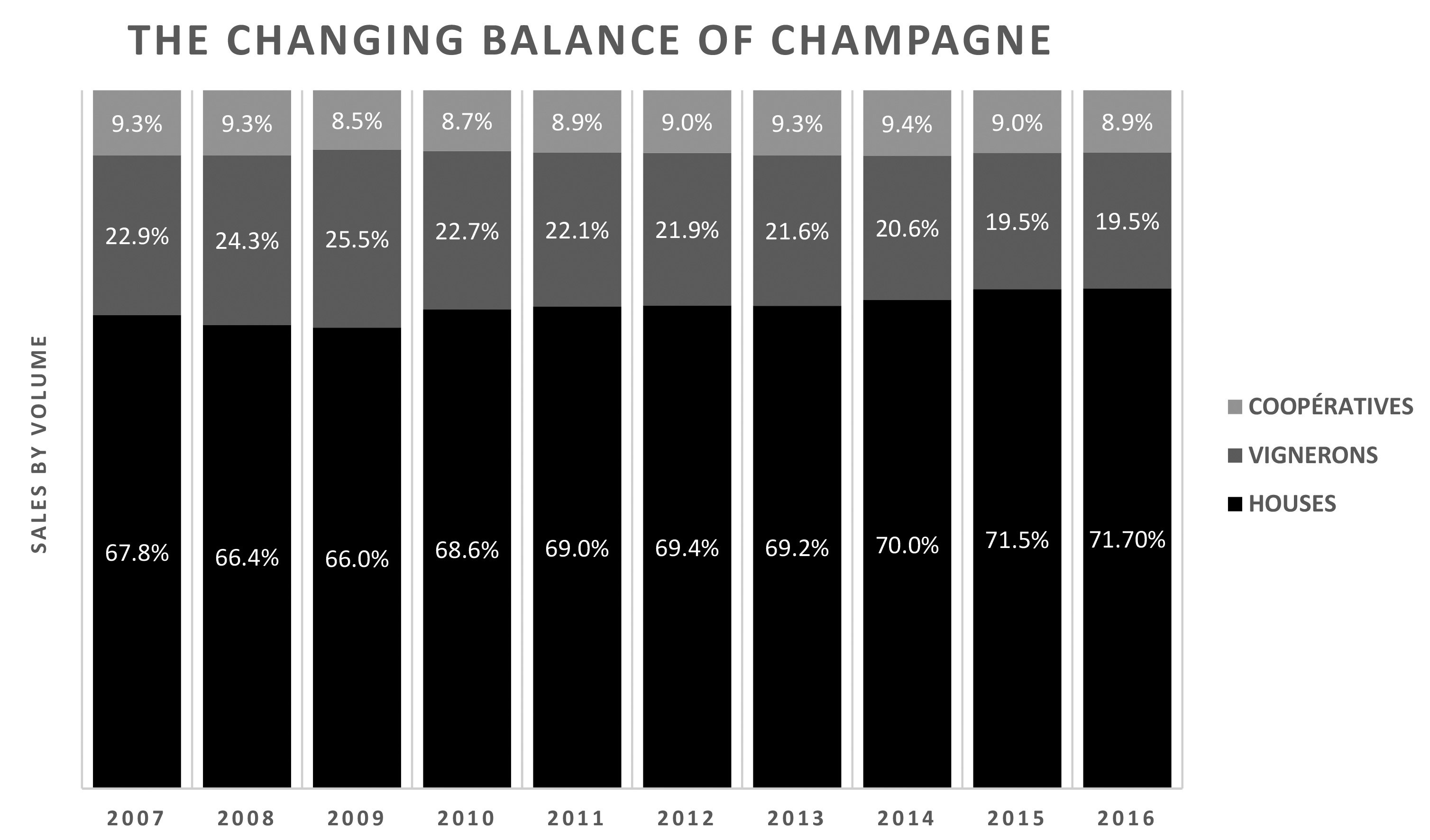 Hong Kong holds its position as the 15th largest champagne market on earth, with 1.69 million bottles landing in 2016. Only a decade ago it ranked just 23rd. 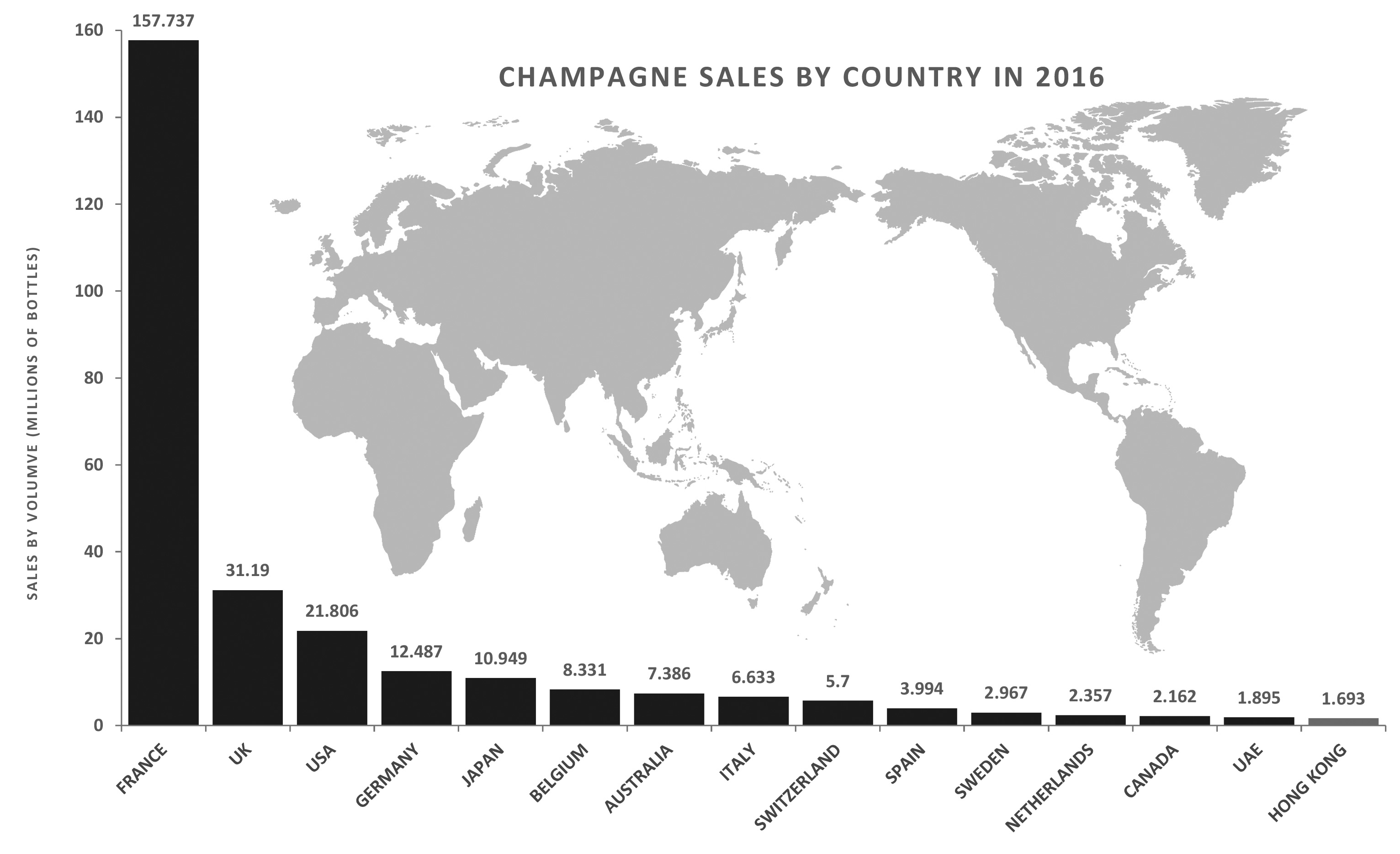 Hong Kong enjoyed rapid growth in champagne imports after import taxes were abolished in 2008, but this growth has softened to an average of just 1.7% per year over the past four years. The champagne bureau has forecast that this should rise to 1.9% in 2017 and has singled out Hong Kong as ‘a market with great potential’ thanks both to its ‘role as “wine hub” of Southeast Asia’ and growing domestic consumption. 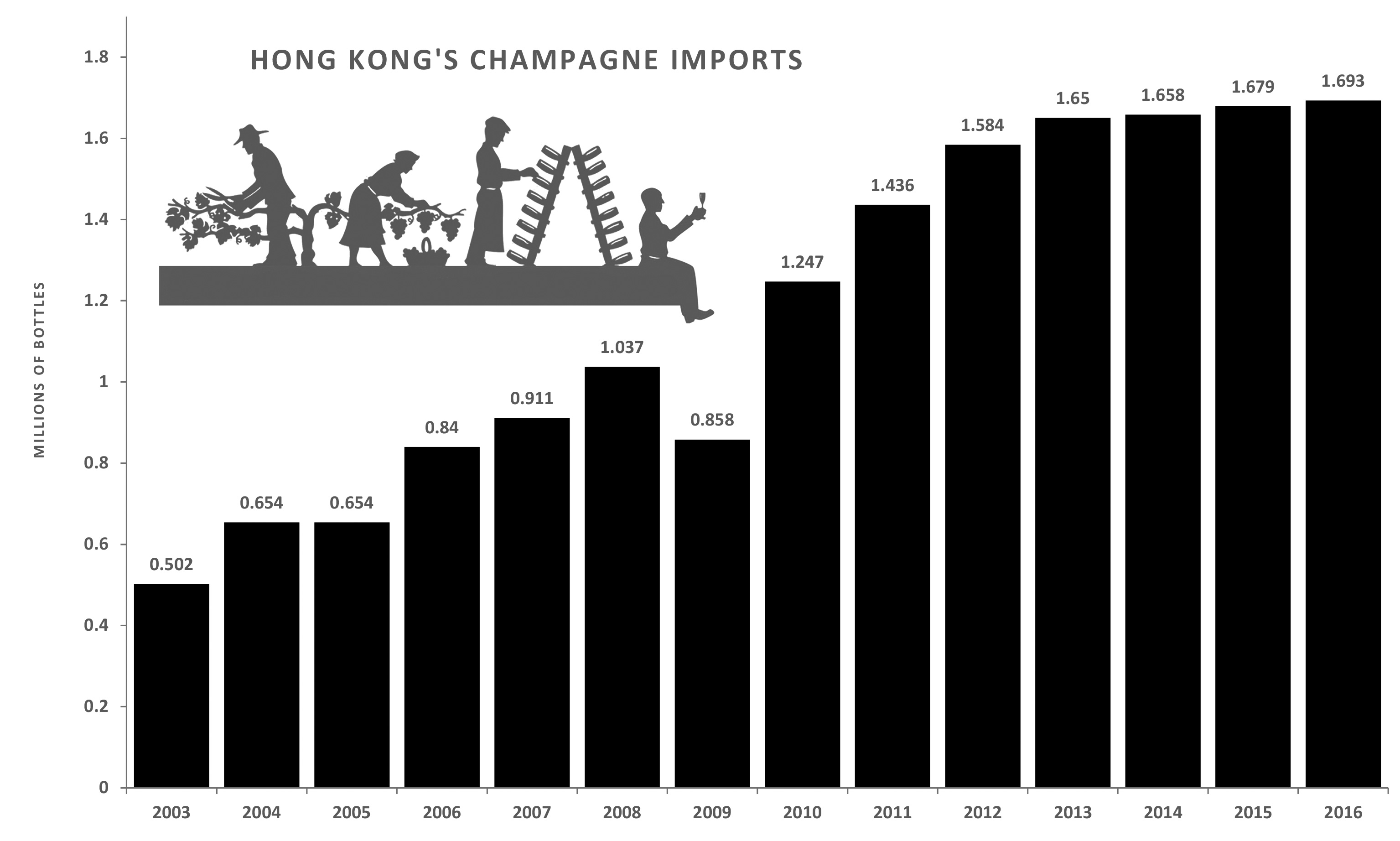 Hong Kong confidently holds its place as the seventh largest champagne market per head of population, and ranks alongside Australia as the only country outside Europe in the top seven. 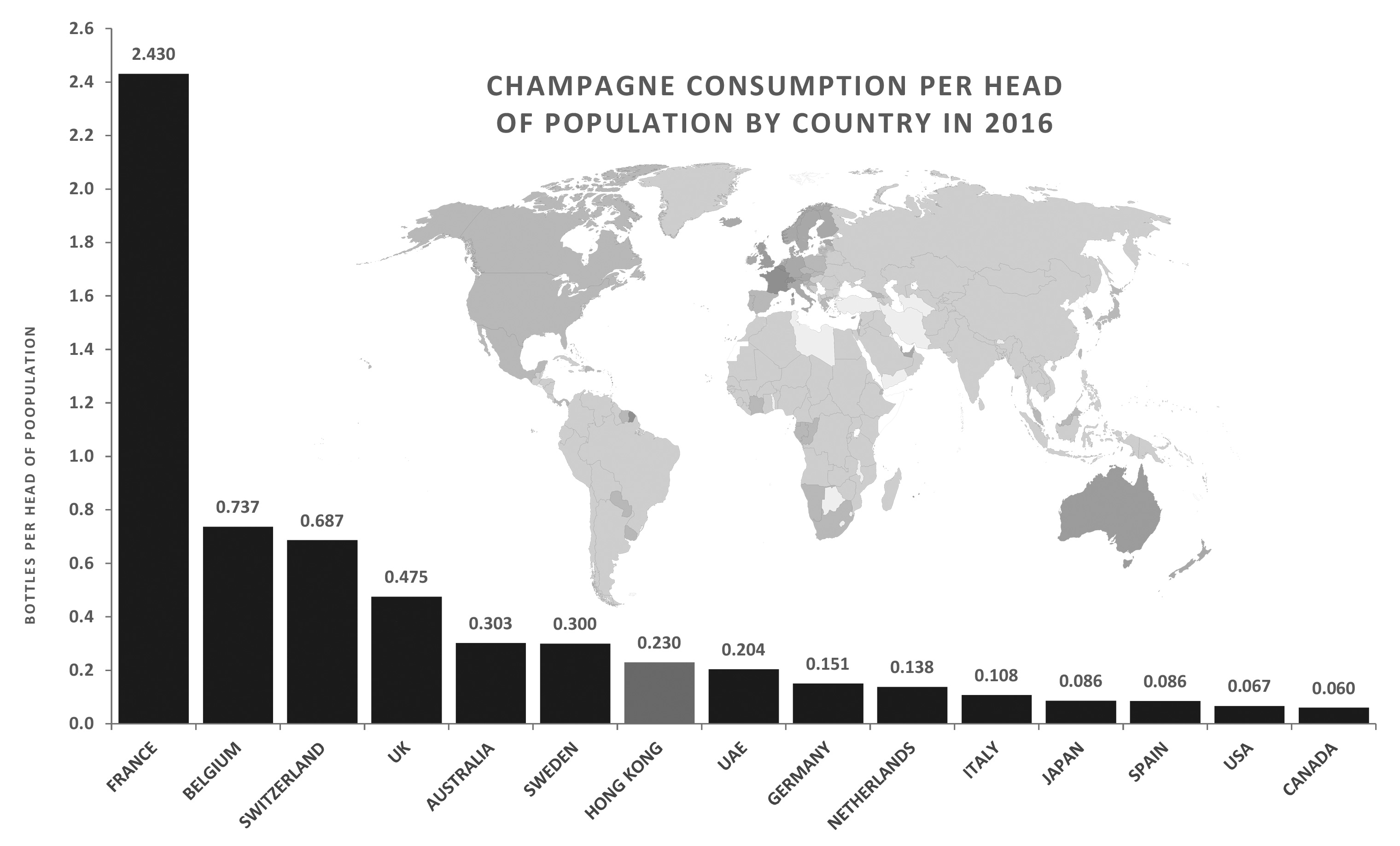 The grower and cooperative crisis

Of Champagne’s largest markets, Hong Kong is dominated more by champagne houses than any other apart from Australia, with just 4.3% of market share by volume for champagne growers and 1.8% for cooperatives, compared with 19.5% and 8.9% respectively globally. This places Hong Kong second lowest behind Australia for cooperative imports and among the lowest of Champagne’s biggest markets for grower imports. This means, of every 15 bottles of champagne sold in Hong Kong in 2016, 14 were from champagne houses. Globally, it’s fewer than 9 in 15. However, there is promise in the trends for growers and cooperatives. Just a decade ago, houses occupied 97% of the Hong Kong champagne market, with just 1.3% and 1.6% left for growers and cooperatives respectively.

Of Champagne’s top markets, Hong Kong’s average spend per bottle ranks second after the USA, reflecting the strength of Hong Kong as a premium champagne market. 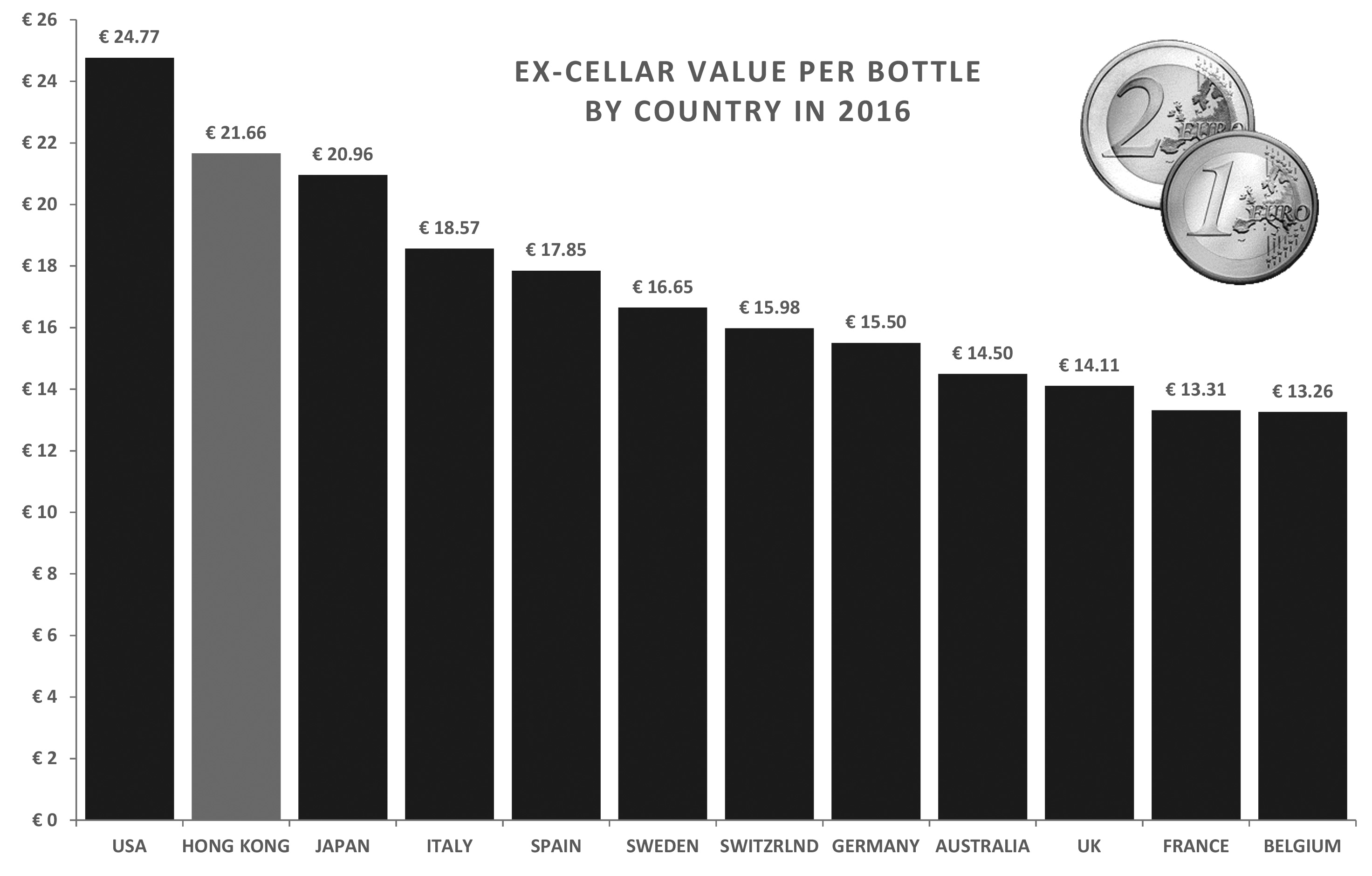 Of Champagne’s top markets, Hong Kong is dominated by non-vintage champagne less than most. Non-vintage represents fewer than four in every five bottles sold. 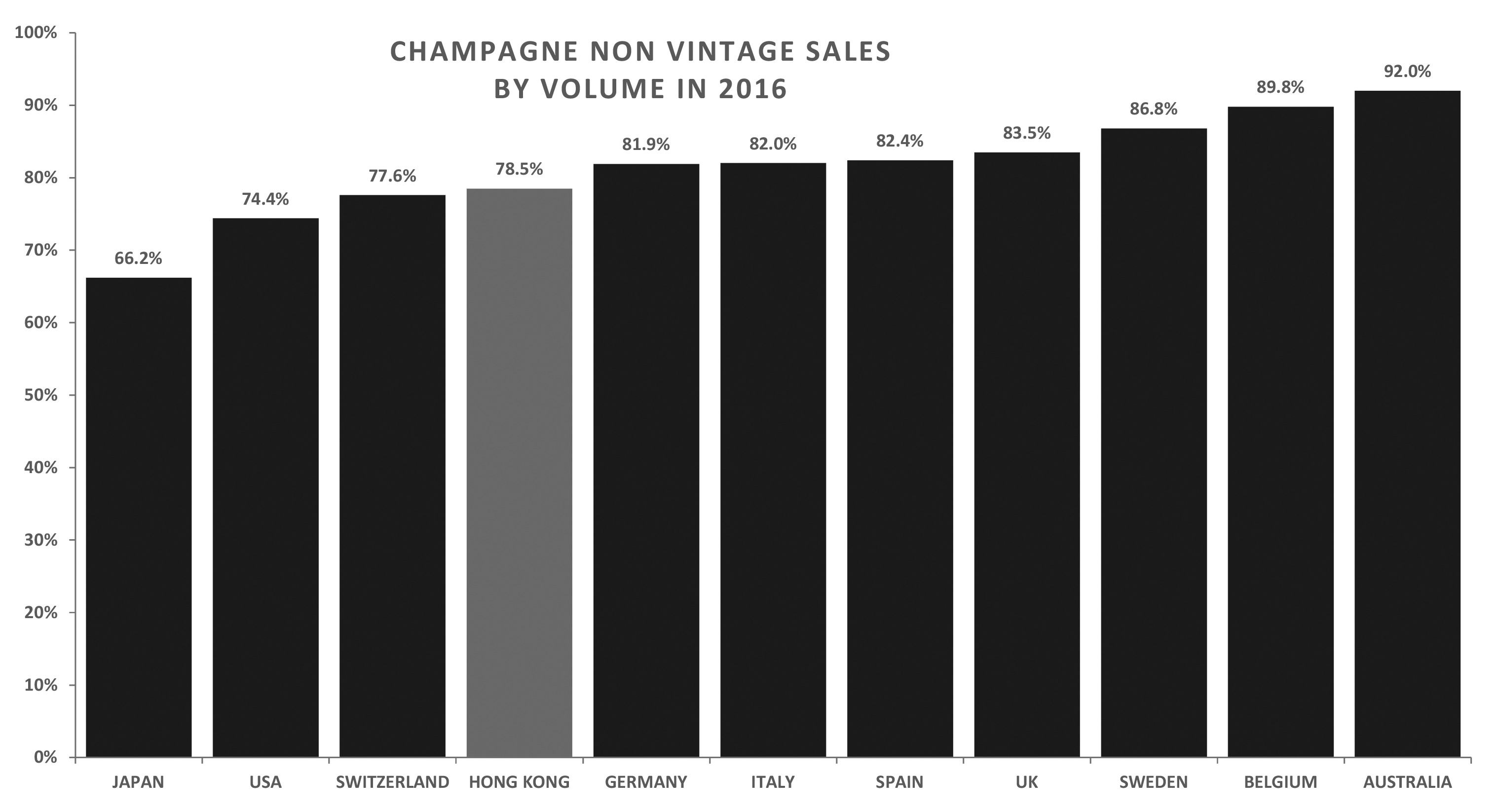 Of Champagne’s top markets, Hong Kong ranks a little lower than average in rosé sales. One in every 12 bottles of champagne popped in Hong Kong is pink, compared with a little more than one in ten globally. Champagne rosé is elegantly suited to Hong Kong’s diverse cuisine and warm climate and deserves pride of place in every celebration. 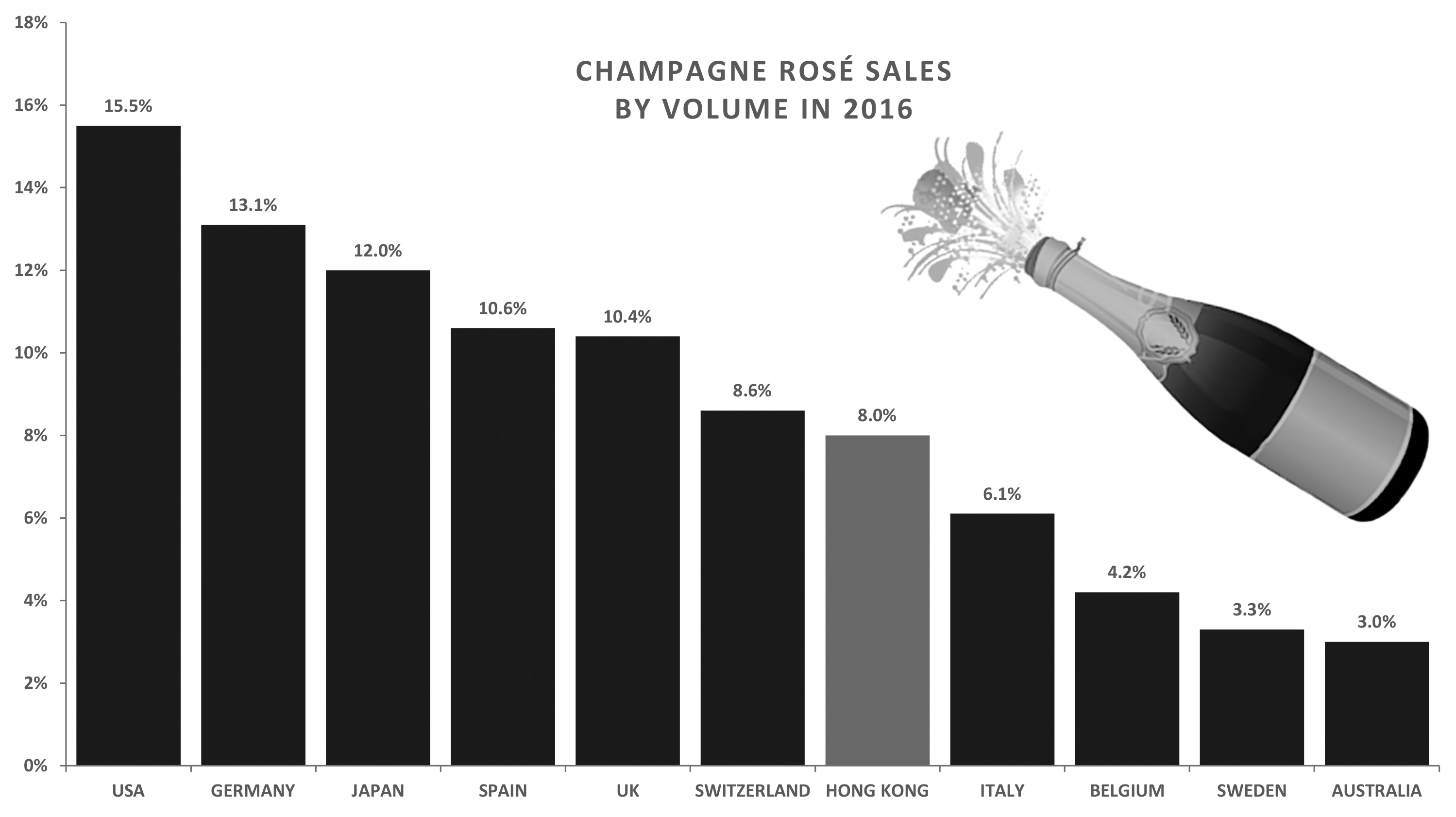 Of Champagne’s top markets, Hong Kong ranks third behind Germany and Japan in prestige sales. One in 11 bottles of champagne purchased in Hong Kong is prestige. On average across all markets, it’s a little more than one in 22. 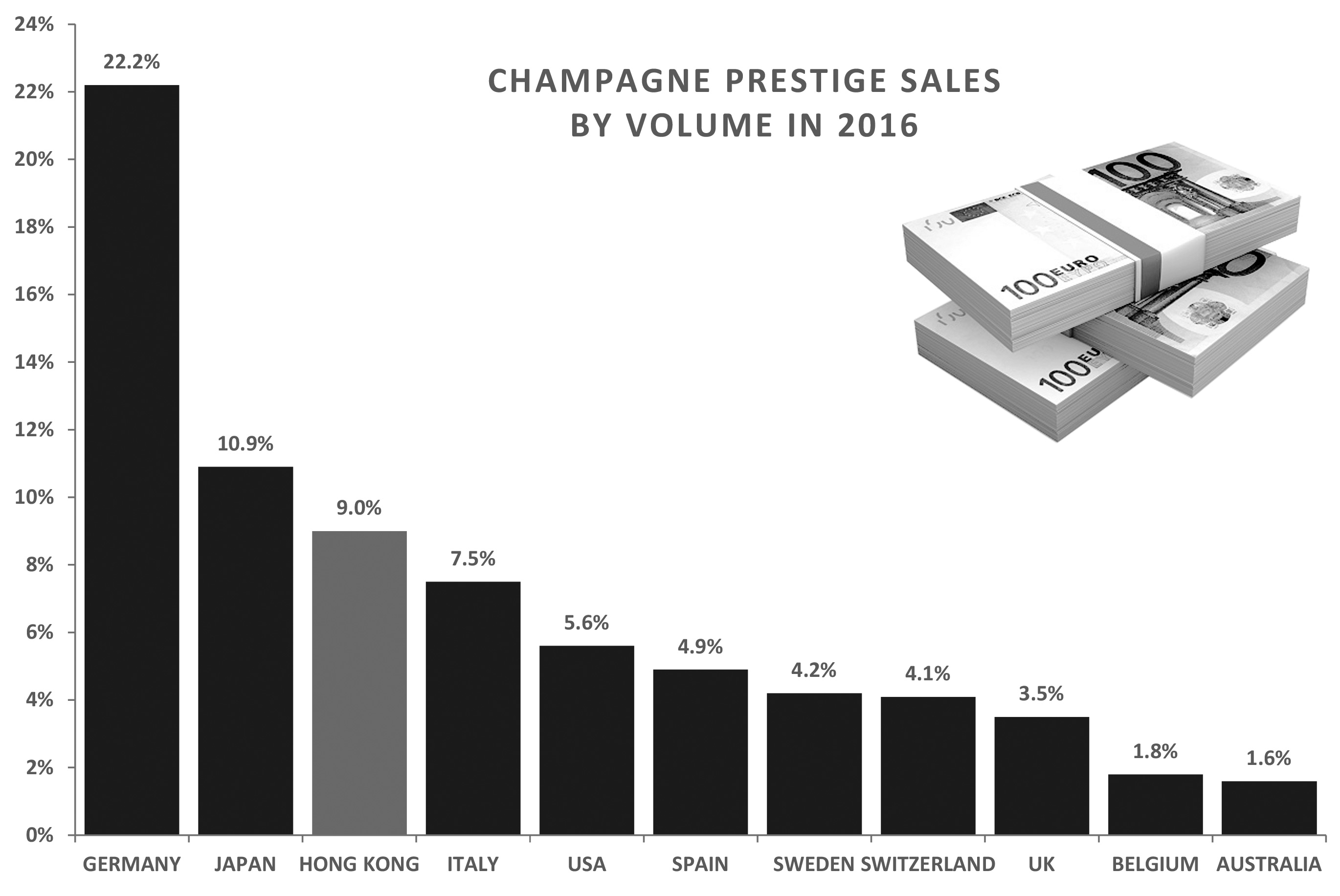 The runaway success of vintage champagne in Hong Kong is unparalleled in any other market on earth. Vintage represents a tiny category in champagne worldwide, making up fewer than one in every 60 bottles of champagne sold. In Hong Kong, it’s one in 11 bottles, almost three times more than Sweden, the next highest. Hong Kong has embraced what is widely heralded as champagne’s most underrated category of all. Production is minuscule and typically a strong step up from entry non-vintage blends, yet largely underappreciated by other markets. Look out for the spectacular 2008 vintage this year. 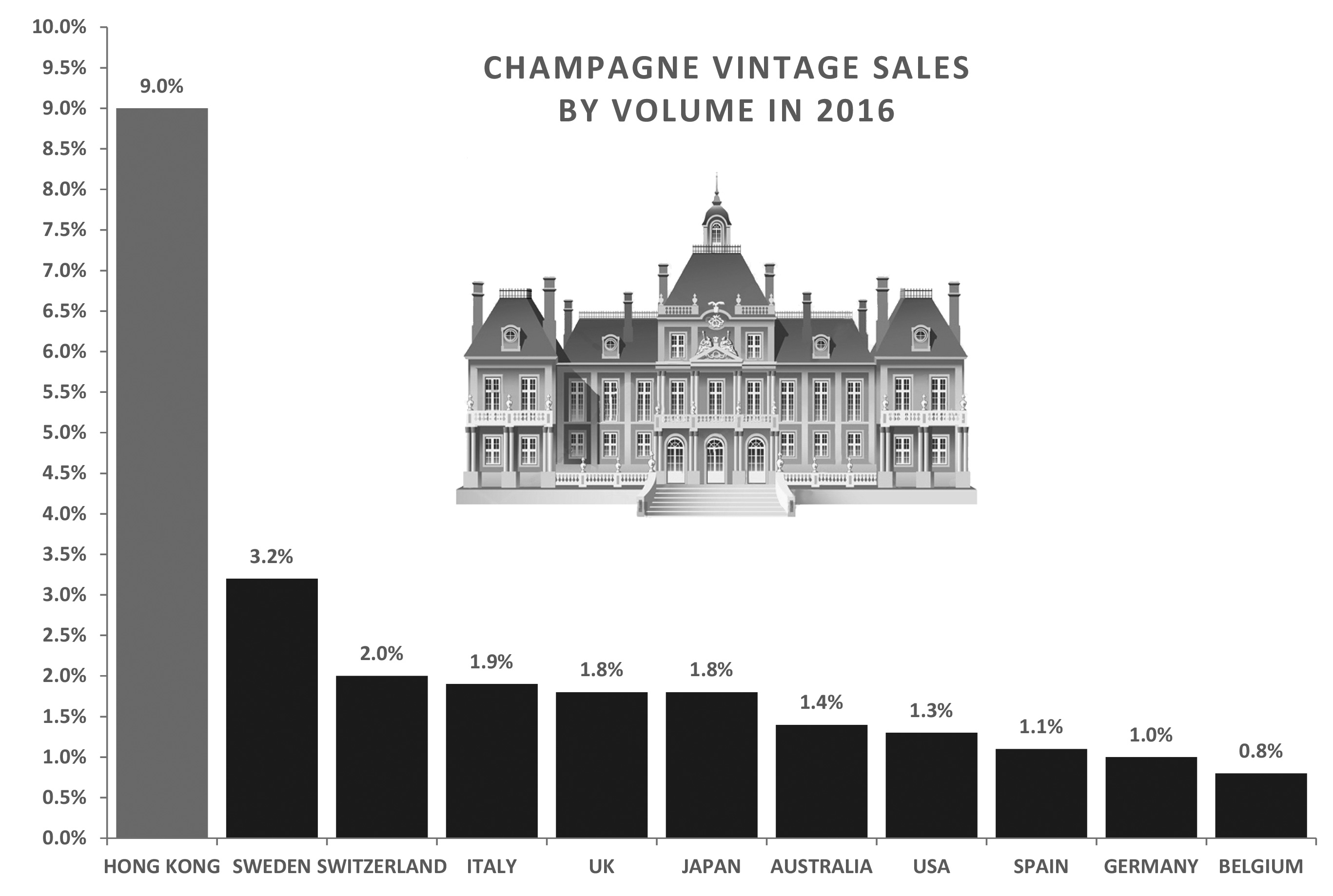 For the past four years, Taste Champagne Australia has grown to become the largest champagne showcase on earth, this year showcasing 215 cuvées from 74 houses for more than 1,000 top media and wine trade, 1,100 public and 400 exhibiting agents at ten events across Australia.

Taste Champagne welcomes and champions every style of champagne from every sector – houses, growers, cooperatives, non-vintage, vintage, rosé and prestige.